A book about  Ramayan the epic .  Raavan the king  of Lanka  kidnaps Sita , the wife of Ram (prince  of ayodhya) and how ram rescues her with the help of hanuman is the story or to be precise the version  that we have always heard and is said to be written by Valmiki.

But there are more than 300 versions as per google and this story is one such version where the author tries to convey a gentle story with peculiar illustrations. 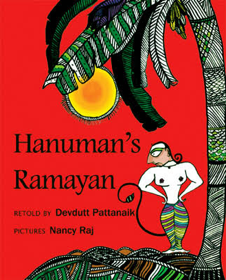 Valmiki was the happiest person in the world after finishing his write up about the life of ram , which he called as Valmiki Ramayan.Everyone was impressed , right from Indra the rain god , vayu , Agni, Varuna and the river goddesses .

But Narad the sage was not impressed reason being he had read a better version of Ramayana .An upset  Valmiki , became impatient and was unable to accept the fact that there was a better version,because as per Narad it was written by Hanuman the monkey and a true devotee of Ram .

Anxious Valmiki went on searching hanuman to foothills of himalayas.whether he meets hanuman, was he able to read the version which is best according to narad is the rest of the story.

Story that teaches devotion and ,a monkeys devotion towards his master . A great book to start with , before introducing the epic to the kids .Beautiful Mithila folk paintings were very expressive and it speaks the story . After reading this one hope everyone goes on searching the various versions of Ramayan , like we are doing right now .