Title : The Uncorker of Ocean Bottles

Is there anyone who has held or holds such job ? was the first thing which came to mind when I came through the title of this book .

But wiki says , during sixteenth century , queen Elizabeth I has created such a job profile , where navy people used to communicate important messages about enemy countries  offshore through a bottle . The uncorkers duty is to open them . 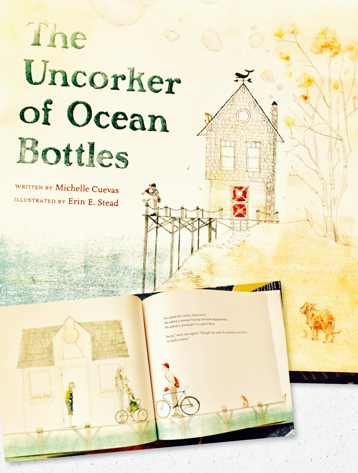 The uncorker of ocean bottles is a stinky man with a drab personality, who lived  near the ocean with only one tree for shade . He had an important  duty of looking at the ocean for any bottles with messages , opening them and handing it over to the respective person .

Either the place of delivery is nearby or far off , the uncorker did his duty without any hesitation . For him , the letter can hold the treasure of a clam hugged pearl , while he felt happy doing his duty , a part of him hoped that he would also receive a letter in his name one day in a bottle, but it won’t happen , because he  neither had any name nor any friends or relatives to send any .

One day he receives a letter without any name , it holds the message of “invitation to the party at seashore ” , he starts the journey in search of the unknown person and ends up in disappointment as well as a surprise.

Whether he was able to find out the receiver to whom letter belongs to ? What made him to feel disappointed and surprised at the same time ? is the rest of the story

Before Emails and smart phones took over there was a period where we used to wait for the postman to check whether we have received any letter , it gives a sense of excitement until the letter has been opened and read.The author  should be thanked for bringing back such memories through

his simple  narration. Illustrations are excellent and apt for the story , oil pastel and pencil drawings clearly expresses the mood  of the characters .

The uncorker of ocean bottles is a story with a message that why it is important to have a community , either in the form of a friend or a relative . a story  that helps the readers to understand the importance of a family , a story that teaches that why loneliness is considered as a terrible poverty , and last but not the least , it is a story that helps to understand  the true meaning of happiness , which is the one that comes from making others happy .

2 Replies to “Book Review : The Uncorker of Ocean Bottles”