Pura Belpré award winner(Medal )  for narrative in the year 2002 .

Based on the author’s own life events, this story revolves around a young immigrant from Mexico to the US . 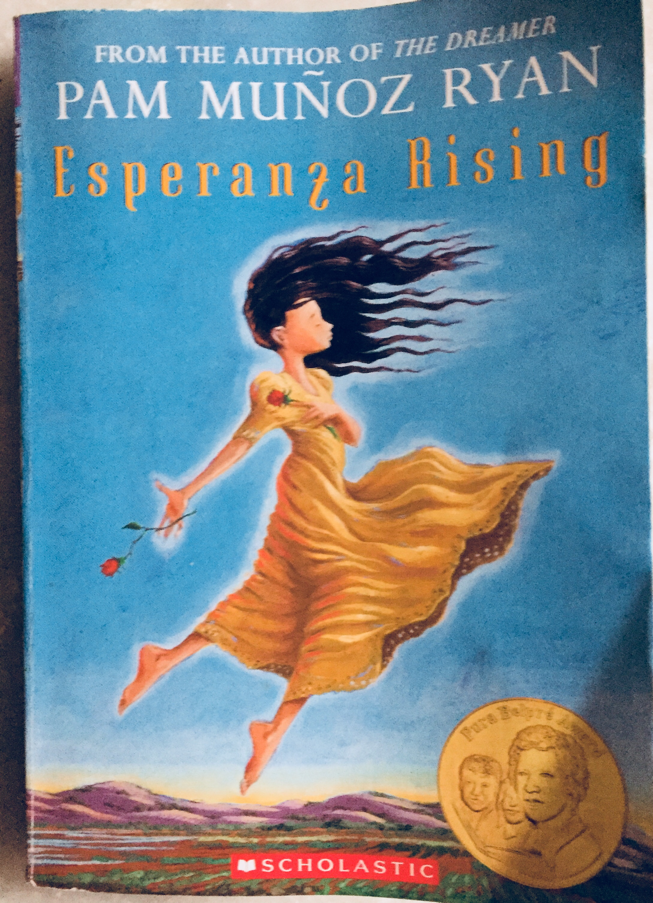 Esperanza ,was the daughter of a rich rancher Sixto Ortega . She lived in el Rancho de las Rosas , Aguascalientes, Mexico  along with her father , mother Ramona , grandma abuelita and the servant family Alfonso , Hortensia and their son Miguel .

She was an Happy go girl until her thirteenth birthday , it was the end of the harvest and she was all set for a feast the next day  since it was her birthday. But to her shock , her father who went with the farmers for some

Cattle work , didn’t return home till evening . Her  father’s step brothers Tio Louis and Tio Marco who hold a big post in their community ( whom she doesn’t like ) comes home just to say that her father and his men  were attacked by the bandits and they are no more .

Life gets upside down , Her uncle Tio Louis , the bank president comes with a proposal to marry her mother ,reason being he wants to compete for the governor post  and Ramona by his side as a wife will help him to get more votes . Their house  and the ranch was set on fire since her mom refuses his proposal . Abuelita gets a fracture in her ankle and was sent to the convent where her sisters work.

Mama , Esperanza and the servant family escapes to Los Angeles with the help of their neighbour and abuelita’s sisters .abuelita was left back in el Rancho de las Rosas since she was injured, but she had promised to join them once she is cured . They get settled in a Mexican camp where Alfonso’s brother and his family lives .

From a princess to an immigrant in a camp , they were forced to start the life again in a small wooden cabin . How she gets adjusted to the life as an immigrant , the tough times that followed her and whether abuelita has joined them is the rest of the story .

An heart touching and inspiring story on perseverance , struggle , loss , hard work , hope etc. The character , Esperanza impresses us right from being a rich ranchers daughter who used to say to Miguel “ we stand on different sides of the river “ to Moving away with him as an immigrant ,facing lot of hardships in USA ,and feeling for the words she said every time when she came across Miguel . The story starts with a Spanish proverb which means “ He who falls today may rise tomorrow “ that typically conveys the theme of the book . Miguel’s character is very impressive , he reiterates to Esperanza every time that how important hard work  and perseverance is .Do not ever be afraid to start over is the concluding words of the novel by Esperanza , while she is waiting for a better tomorrow ,because Esperanza means Hope in Spanish .

Check out the book to find out how Esperanza is trying to rise against all odds .